Dark and Continent: Fit the Seventh: Rwanda by Okapi 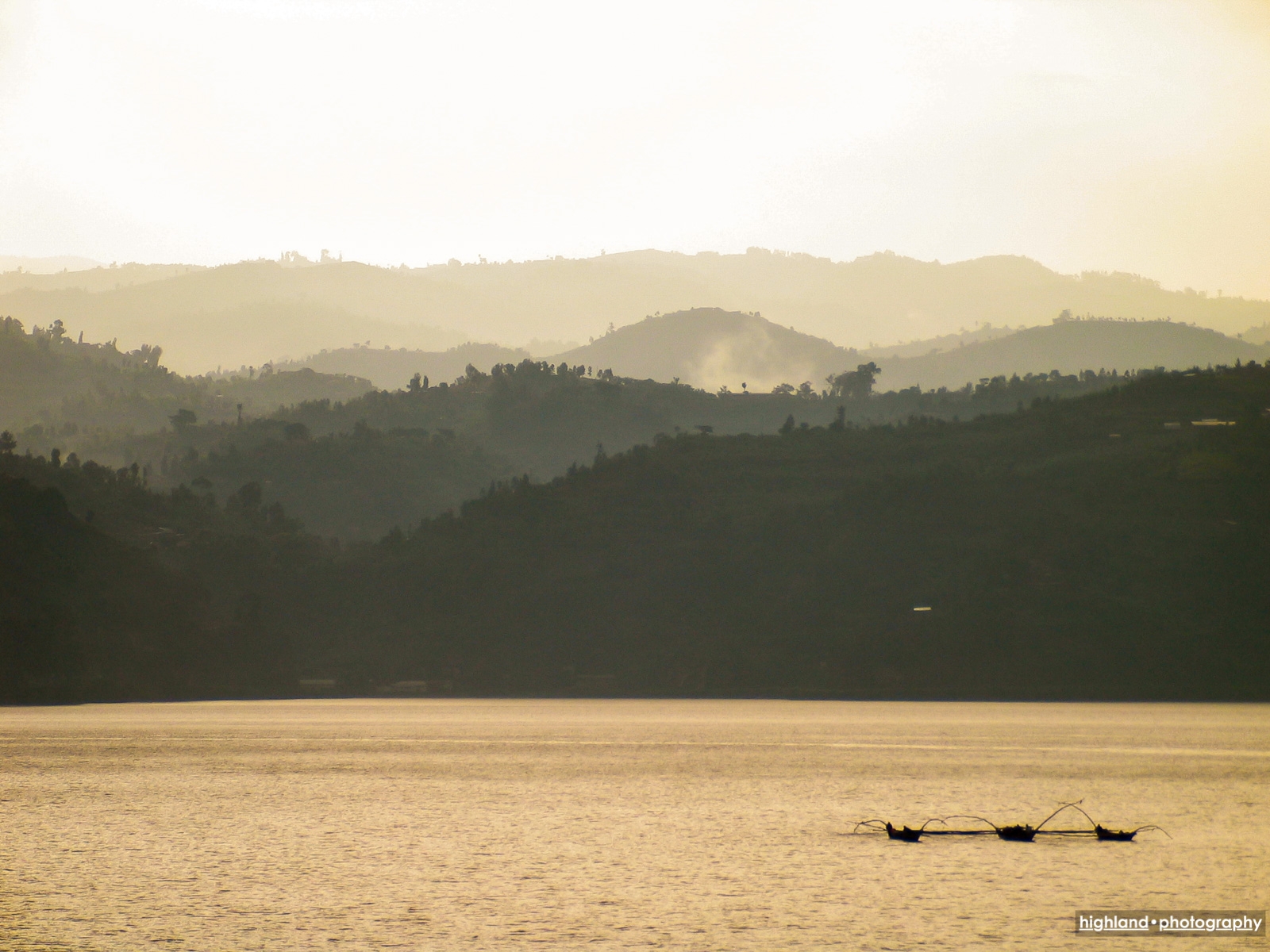 A slightly belated hi from Goma…

My meetings and training in Goma – the Masterclass in the Mist – taking people from the basics of computers to digital video editing in three days – over, and I’m due to head back to Kigali early Saturday morning, with an early start needed, to get the low morning light for photos of the town and to do some hard bargaining in the market. This is the place to get real, proper, authentic, no-nonsense Congolese tribal masks, hopefully separated from their original owners in a dignified manner. Mission successful, so you and yours can look forward to being frightened in assorted dark corners of my house at some point.

An early start? Means that a heavy evening on the town the night before is a absolute inevitability. This time it’s with Henry (local DFGF chef-de-bureau) and John, an accountant pygmy. I think that’s right – if he were a pygmy accountant, he’d probably be rather too specialised. The evening starts with a local celebration at the hotel, and they’ve laid on the local Ballet Culturelle – regional dancers, exuberantly and brilliantly showing off their tribal culture, costumes, co-ordination and quite astonishing grins. Then it’s time to hit the town – and Henry is determined that I’m going to have some good stories to take back, so we bypass the slightly Western-sanitised compounds of Bobongo (Henry’s take: Politicians, NGOs and mass murderers) and Coco Jambo (Henry: drugs and debauchery; Me: So why aren’t we there?), bump up onto the steaming lava wasteland that was once downtown Goma, weave through an assortment of back alleys, where the half-collapsed upper stories of stone buildings protrude from the glistening black volcanic clinker, between the twisted mechano-spaghetti of melted steel roof beams and arrive at a gaudy blue lean-to that fills the gap between two not-quite collapsed buildings – I’m not quite sure which part of the ensemble is holding the others up. There’s a bunch of vehicles and random hangers-on gathered around the rope-curtained door, beneath a whitewashed sign which sayeth, “Cap Sud”. So this is it – the real Goma nightlife. It’s crowded, loud and the dance floor is packed to the point of overflowing, personal space being a largely irrelevant concept. We grab a vacant table, introductions are made to various friends, relations and a large bottle of Primus. Look around: The ruins have a half-canopy of woven banana leaves, and tables of various shapes, sizes and degrees of decrepitude have been dropped in, not entirely at random. There is however a carefully laid dance floor, where that of the rest of the establishment is a layer of ash (volcanic – very few people seem to smoke here). The lights are well done and the sound system would seriously embarrass many London clubs.

Relaxing in my seat, my hand brushes the ground – it’s warm to the touch. Glancing skywards, I see the tropical constellations parading directly overhead, fading into a red glow to the East. As my eyes adjust to the darkness, I realise that what I’m seeing is the glowing cone of Nyiragongo, spitting red sparks into the night air. Pause for recalibration of reality – this really is life under the volcano. I feel very much alive, possibly temporarily. No photos though – carrying a camera into a Congolese night club frequented by various military and paramilitary factions is not a survival tactic – we could drop the ‘possibly’ from the last sentence.

And I find myself discussing life, the universe and everything with a guy whose nose only just appears above the opposite side of the table – I’m irresistibly reminded of the old Kilroy cartoons. John also appears to know most of the women in the club, all of whom rush over to greet and hug him, and then be introduced to his mzungo mate – John proving a great social icebreaker – every party should have one.

One thing I’ve noticed about this trip – the soundtrack has always matched both the place and the mood of the moment: While trogging around Kigali, Vince’s taste in internationalised World music very much fitted the cosmopolitan, but very African, mood of Kigali; moving to Ruhengeri, we had abundant tapes of laid-back local musicians playing distortedly in the jeep; and in Goma, the high-energy Wild West town to beat ‘em all, the background was a relentless and utterly appropriate beat of hard-core techno anthems.

And, some time later, I learn about the lake: This came when, flying back to Nairobi from Kigali, the person sitting next to me turned out to be with UNHCR – she has an interesting job – drawing up the contingency plan for the evacuation of the entire Kivu region in the event of the lake getting stroppy. Come again? OK – the whole region’s volcanic, innit? That includes the bit under the lake, into and under which, many volcanic gases are trapped, including vast deposits of Methane and Carbon Dioxide. In fact, the lake itself does not support many species of fish for a body of water its size, the principle reason being that it is just a bit toxic. Certain areas you’re warned against swimming in, especially in the morning, as a layer of gas can, and does, hang invisible over the water and suffocate innocent swimmers-by.

I’d known about this, but had it figured as a localised and transient phenomenon. What I hadn’t realised is that the worst case scenario, in the event of another eruption disturbing the precarious balance of forces, is what’s called an inversion where, as implied, the lake essentially turns upside down and releases all the trapped Methane and CO2 in one massive planetary fart. There are two immediate problems with planning for this eventuality – firstly, over two million people live on the shores of Lake Kivu and, secondly, the vulcanologists reckon that the best warning they could give would be all of, ah, eight minutes. Tricky. There’s also a third – the Ihusi, the hotel in Goma most favoured by NGO staff (and self) is of course beautifully set on the shores of Lake Kivu. I wondered why they didn’t have candles on the table at dinner. Anyone wandering down by the lakeshore for an after dinner smoke could be in for a very nasty shock. Reminds me of that otherwise largely forgettable movie Dantés Peak – where Pierce Brosnan et al attempt to cross a volcanically acid lake in a rapidly dissolving aluminium boat. Trivial stuff in comparison. Actually the ‘otherwise’ there is that it also stars Linda Hamilton – Terminator gal. Sigh.

Now consider my earlier snide aside about the gorillas choosing an evolutionarily, um, disadvantaged place to live? They got nothing on human beings. I mentioned all of this to an American tourist I was talking to in Kenya the other day – he thought the whole idea of living in such a region was quite insane and demonstrated a thoroughgoing recklessness on the part of people and government. He was heading rapidly for the ‘but life is cheap in such places so why should we help them“ argument, so I asked him where he came from: San Francisco. Thank you, the god of irony.

Henry was going to drive me back to Kigali, in the DFGF Congo car. Nice theory, but what we didn’t know was that the Rwandan and Congolese authorities had changed the rules on us: not only did one insurance no longer apply to both places but a different number plate is required to pass from one to the other. This being despite the same government running both places, the Rwandan army having annexed the historically claimed Kivu province in the name of national security a few years ago. This new ruling came in on 31 January. This was now 1 February. So we ended up in the slightly unsatisfactory position of having ourselves cheerfully waved through into Rwanda, just as long as we left the car behind. It’s a bloody long walk to Kigali – and I’m carrying multiple computers, cameras, rucksack and enough tribal carvings to restock the British Museum. I tell a lie – I’m failing to carry this lot, lacking sufficient limbs to hang ’em off. We stagger to the local bus depot, where we board an Okapi – less an antelope, more the dreaded minibus service between towns. These things leave when full then, as previously noted, drive like there’s an erupting volcano behind them. There is? Ah… On the descent from the mountains into Ruhengeri, the driver thoughtfully passes out black plastic bags to all and sundry – use obvious. I have a slight sense of humour failure, which soon passes in the name of experience. Or something. At Ruhengeri though, we manage to secure the services of Moses, a good local taxi bloke I’d used a couple of times before. A quick and nostalgic reprise lunch at the Muhabura, then back to Kigali in time for tea, then beer, rather more beer, then some more after that in Addis, the local Ethiopian bar & restaurant. This is where I have a concept failure: an Ethiopian restaurant? – Surely the ultimate extension of nouvelle cuisine – an empty plate with a single grain of UN-donated rice in the middle?

More or less fell out of bed with a rotten hangover, straight into brilliant early-morning Kigali sunlight. Ouch. Airport beckoned, with some little doubt as to whether my flight booking had been cancelled (it had). Just real tough if I’d have to stay a few days more in Rwanda – I’ve been less and less looking forward to returning to Nairobi – big soulless scary, tourist-ridden city and all that sort of thing. To be strictly honest, the thing I’m really scared of is changing myself, from worker/traveller to tourist, as I head off on safari in the Masai Mara as a coda to the whole trip. Not an entirely comfortable transition, and one which puts an immediate barrier of purpose between self and environment.

Of course, Nairobi turns out to be scary enough now that there are almost no tourists and BA appear to have cancelled all flights – apparently 2” of subversive terrorist snow have attacked and paralysed England, so it looks like me and assorted other fundamentalists and loons will have the place pretty much to ourselves. Cool. Oh, and the Fairview hotel is next to the Israeli embassy. Target paranoia aside, it’s another hit – five acres of gardens, just a couple of km from the city centre – took a few laps of the place to work out layout and whereness of various garden bars, terraces and the pool. Then relax in sun to fresh orange, iced latte (real milk at last – apparently the mark of a hopeless Africa case is when you prefer the powdered stuff to the real thing. So I’m safe, for a while at least). And why, when Rwanda is a major coffee producer, is it damn near impossible to get a good cup of the stuff there? Still, I managed to buy a large bag of beans at the airport, so my baggage and hotel room are now splendidly aromatic.

And no, I haven’t misnumbered this ramble – there was a sixth. It was about the genocide, and the genocide memorials. Having met, worked and made friends with a good many people over the last few weeks, I’ve found every single one of them to have a story of fear, pain and continuing loss. Of how they and their family hid in a water tank, a cave, a sewer. Of families and friendships decimated and lost. I lack morbid curiosity, but after getting to know these people, it did seem to be only respectful to find out more. And that is what I tried to describe, but ran out of words – we all know what happened, if not entirely why. We know the raw numbers. Beyond that, no description is sufficient. There can only be experience.