Dark and Continent: Fit the Second: Green, Pleasant and Landed 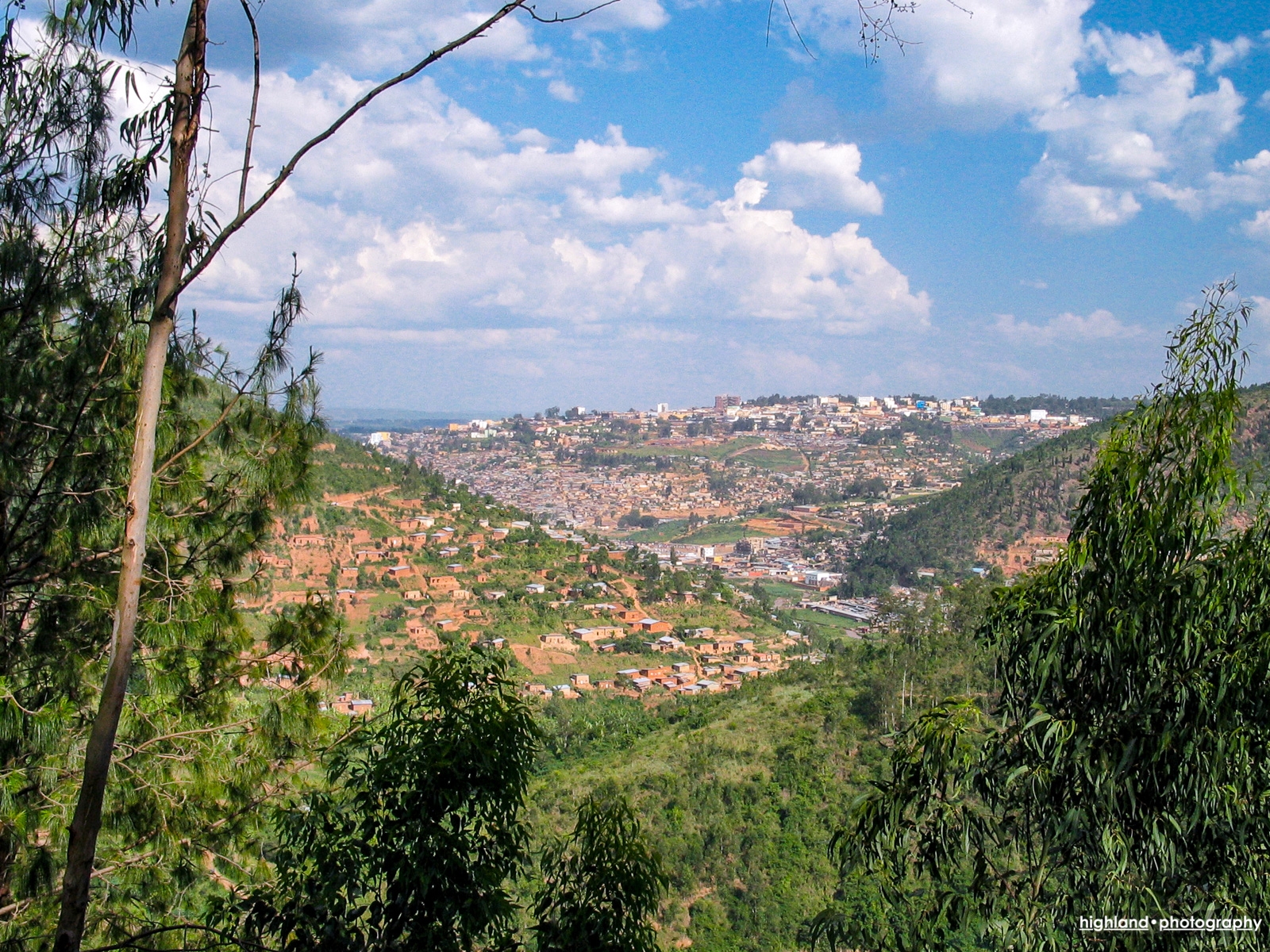 Mais je crois que c’etait une pays Francophone et les gens ris en plus quand l’Harris s’atttempte a parler Français. Maintenant, je retourner a l’Anglais… Gawd, that was too much like hard work – fortunately most people here speak English at some level or other, particularly the Swedes, Germans, Danes and the other entirely unsuited pale Northern types who seem to make up an unfeasibly large proportion of the population of Kigali. Which goes a long way towards describing a country that is being almost entirely (re)built with the blood money of a guilty global community, which having entirely failed to intervene and prevent the internecine slaughter of a million people and the displacement of many more, is attempting to salve its conscience by sending a million-and-one NGOs (Non-Governmental Organisations) in to do whatever it is they do: generate acronyms for the most part – UNHCR, UNESCO, ICT, WHO, FAO, ICRC, MSF, AFACOD, POPOF, AIMPO, WI… And when the Rural Agriculture pour Protection de l’Environment came to town with their be-logo’d vehicles, they were nearly lynched before Vince was able to have a word in their collective ear.

Having literally run into my DFGF colleague Dan (minor bruising only) at Nairobi airport, we were picked up at Kigali by Vince, the DFGF Field Director. Fortunately he’s just done a good deal with a Danish supplier for a brand new Mitsubishi Pajero 4WD, so rather than being rattled through the countryside in some superannuated rustbucket, we’re trolling around in smugly air-conditioned comfort. Makes a change to see the things working for a living, rather than just tackling the rigors of the Surrey school run. About half the vehicles on the road seem to be in ubiquitous UN/NGO white, and there’s clearly a hierarchy of machismo going on – from the Danish human rights bods in their cheap Toyota pick-ups (really bad haircuts, guys…), to the UNHCR and MSF with their Landcruisers bristling with satcomms aerials, wombat bars (I haven’t the heart to tell them…) and river-crossing gear. As in Surrey, these huge vehicles are suspiciously clean and unscarred. Scurrilous gossip has it that most of the fighting in town is now between the dozen or so competing and frantically self-justifying NGOs that descend like harpies on anything vaguely resembling a cause.

Kigali itself shows little superficial sign of bleakness, trauma or depression – it’s a busily self-important town of (I guess) something over half-a-million people (excluding NGO employees), whose overall size is hard to grasp, as it rolls across a stunningly beautiful range of lush green hills. I am now in serious danger of overusing the word ‘lush’, both as adjective and noun. Well, that’s upland Africa. Actually upland by 1127m, according to my GPS, thereby geekly settling a long argument that’s been raging amongst a whole bunch of locals. This is a good thing (the altitude, not the argument), as it makes for a climate that is pleasantly warm without being excessively humid, except for just before the obligatory mid-afternoon thunderstorm. Daytime temperature is running at around 29-32c – even this cold-climate mammal finds it almost perfect, and we’re just into the dry season, so the dust ain’t too bad and all the flowers are out and preening themselves for the camera.

Kigali is a strange mix: A modern and attractive airport (no photos – getting self shot on day one not part of master plan), where an assortment of sleek modern corporate jets sit alongside evil-looking Russian gunships, a brand-new tarmac highway into town, which dives into a sculpture-laden roundabout (this being an ex-French colony, the rule is Priorité a droite, which makes driving even more deeply scary than the African norm), followed by a left turn then immediate loss of fillings, composure and possibly lunch as the car plummets into a deeply gullied red earth track that laughingly claims to be a major local road. Or it would if all the signs hadn’t been torn down in the last round of fighting.

I got talking to a French lawyer on the plane (well, we were both using Macs, so it seemed churlish not to) – turned out she’s a defence lawyer with the ICT (International Criminal Tribunal), based in Arusha in Tanzania – defending some of the more notorious of the 100,000+ detainees from the genocide investigation. A job I can admire her for doing, while not even remotely beginning to envy her the work. This is where we get into the business of pink uniforms and beautiful people: driving through Kigali yesterday we passed a large French-colonial red-brick fortress. Behind the open gates of this building  was a large square, in which were milling around a large number of people in rather fetching pink pajamas. Vince answered our raised eyebrows, “It’s the Kigali prison, and the ones in pink are genocide prisoners”. Remember, the gates were open. “Oh, they all know that if they stepped outside, they’d be killed in seconds by the townspeople”. There was some quiet time after that. What’s also causing concern now is the government’s attitude towards truth and reconciliation – the whole justice process is such a drain on government resources that they’ve started allowing any prisoner who claims remorse and can get a victim’s relative to express a level of forgiveness to go free, but without any job, training or support of any kind. And these are people who, whatever the original crime, have been traumatised for years in what are apparently about the worst prison conditions in the world and who have come out with nothing more than an almost certainly HIV+ souvenir of their time inside. Unsurprisingly, this is worrying no small number of the townsfolk, of all backgrounds. Of which a little: the two main races here and in the surrounding areas are the Tutsi and the Hutu, both now mixing unconcernedly in the daily life of Kigali. While the Hutu are, like the majority of us, cheerfully variable and generally tending to the mesomorph, many of the Tutsi are amongst the most beautiful and elegant people of both sexes I’ve ever seen (recipients of this e-mail excepted, naturally. No, that didn’t work, did it?). Drop Naomi Campbell into the middle of this lot and she’d vanish without trace. Now there’s a thought.

Accommodation in Kigali is in Vince’s large bungalow on one of the posher hills (a better class of road gully), but any thoughts of missing the service at one of the two major hotels in town were soon dispelled by the presence of cook, housekeeper and guard/gardener. Then there’s the two dogs – one an amiable lunatic with the disposition of Piglet and the co-ordination of a Red Setter, and then there’s the other. I’d wondered why the central cubby on the car’s dashboard contained most of a loaf of bread. “It’s for the dog.”. Uh-huh…  Apparently the dog gets v upset if Vince has visitors and tends to attack him at such times. The bread is for pacification and distraction. The couple of times when there’s been a forgetting of the bread and an absence of guard to tie up the dog have nearly led to a night spent in the car. I just got growled at, more I felt for form’s sake than anything else. I growled back, also for form’s sake, and all is now peace and light between us. His dogs are uncommon, simply through presence rather than behaviour, as apparently nearly all the dogs in Rwanda were killed during and after the genocide.

Having settled in and used the phone line for local dial-up a few times (maxing out at 14,400bps for anyonewhogivesadamn – about the speed of forgotten and curdled mayonnaise dripping off a spoon. And don’t ask me how I know that.), I found that there were certain times of day when the connection would drop for no other good reason than it was raining. This got me curious, so I followed the telephone line, to discover a box, and a small dish – turns out that the most reliable phone lines are by line-of-sight microwave links across the town. Trouble is that microwave links degrade in rain, and it does that a lot here. Put that lot together with the need to save bandwidth and we soon arrive at e-mails relatively heavy on the wittering and light on the pics. That’s my excuse etc. etc…

Having arrived on the Saturday evening, we had Sunday lunch poolside at the Umbongo (no, really! – or v similar) Hotel. Very smart place, with views over the hills of Kigali, the hotel gardens and the huge bottle of Primus, the local Sorghum millet beer, that’s just been placed in front of me. That’s all very well when there’s not too much too do for the afternoon, but this is a lunch that requires full and constant vigilance, lest we suffer the depredations of the hotel’s infamous Central African Cheeseburger Kite. According to my bird book, this specimen is in fact a Black Kite, albeit with a specialised diet – anything it can snaffle from diners’ tables, with a virtuoso display of speed, dexterity and massive disregard for its cholesterol levels.

Makes lunch into something of a combat game, with an unpleasant parallel to paintball…
It does look like my blithe assumption that I’d go to Africa and, by the mere fact, lose weight was naïve in the extreme – not only have I spent rather too much time in hotels, bars and restaurants that range from the simply decent to the rather splendid, but Vince’s cook takes visitors as his cue to show off his skill with carbohydrates, at least twice a day. And this in a country where people drive everywhere, usually for good reason.

The last couple of days have been spent at the DFGF Europe offices in central Kigali, sorting comms and shiny new computers out – won’t bore you any further with the details, but we’re feeling quite proud about the effective sophistication (as opposed to gratuitous technocracy) we’ve achieved. That done, it’s time for a change – by the time I get around to another vague rambling, I’ll have spent a few days up in the volcanoes around Ruhengeri, setting up computers, cameras and comms there, then training the staff there in the delights of the digital lifestyle. They can then train me in the art of survival in the presence of Sorghum beer. That’s followed at the weekend by a trek into the Virungas themselves, in search of Guhonda, the Silverback of the Sabyinyo Group and his extended family of relations and friends (the boundaries blur rather in gorilla society). I shall come back with my camera or on it. Or something like that. More anon. And Vince has just opened a bottle of Congolese wine – greyish, with pink highlights, so I’d best take cover.