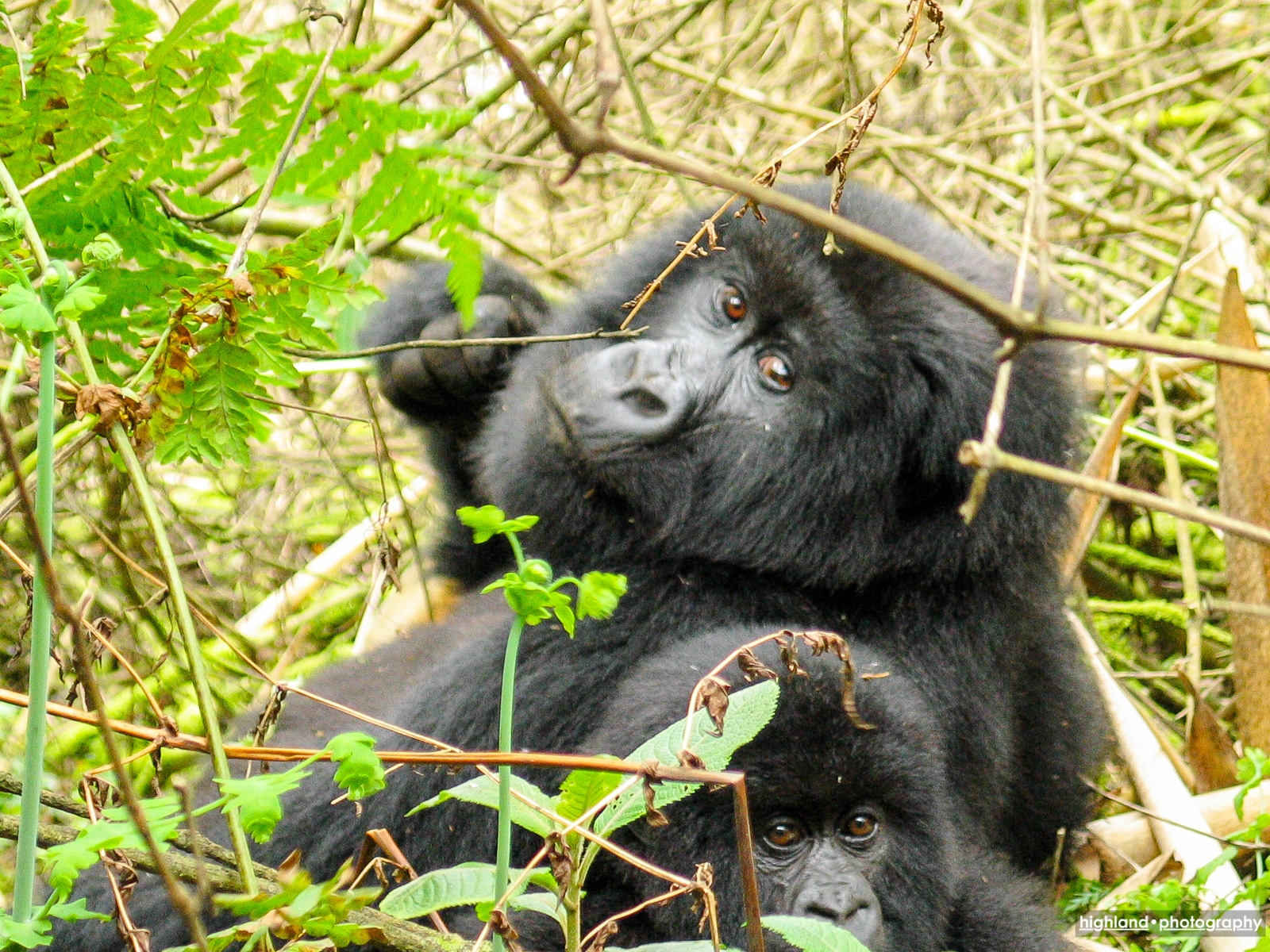 So this is it: time to go see a gorilla or two. Before we get onto the main event, there’s something to confess: I have problem with Gorillas. Or with any species that hasn’t got the hang of evolving somewhere sustainable – here we have a species that has chosen to not only hang out in but to concentrate its entire gene pool into a single area that is chronically ecologically, politically, militarily and geologically unstable. And I’m here to help them? Give ‘em all Swiss citizenship I say – at least they’ll then simply die out through boredom. OK, so given that we’ll allow them a measure of mischance in their choice of ecosystem, I suppose I might as well take a wander along to see how they’re doing.

This involves a 7am start at the ORTPN office – fortunately less than 100m from the Hotel, so even I make it on time. Not that I’d have had the choice, as Emmanuel was hammering on my door at 6:15 – I had to pretend that I’d had my shower and was engaged in meditative Zen snoring exercises to clear my mind for the day. Or whatever. ORTPN only allow a maximum of 6/8 people per day in to see each group, the main concerns being disruption of their normal behaviour patterns (those of the Gorillas, that is) and the accidental transmission of human diseases to the beasties. To judge from the appearance of the assembled company of gorilla wannabes, sartorial taste is excluded from the ‘bad influence’ section of the trekking agreement. It’s therefore fortunate that everyone else gets shovelled off to one or other of the other groups, whilst Emmanuel and myself are the sole supplicants to group 13 (being with DFGF has to have the odd perk or two). Along, that is, with three guides, two soldiers and an officer of the self-important, walkie-talkie toting type. All v friendly and helpful, but taking pics of the army guys politely refused – probably more on image touristique grounds than securité national.

It’s a half-hour by bouncing pickup to the Park HQ, where we pick up our permits, then another joint-rattling ride to a suitable parking point on the track up to the Park boundary proper. We’re already at 2400m by this stage, accounting for much wheezing later in the day. This is where the trekking proper starts: a couple of km over cultivated land, all arranged on a contour-following ridge and furrow system, where the ridges are of course just too far apart to allow me to step from one to t’other. The main crop here is the Pyrethrum Chrysanthemum, so fields of white flowers ripple a moiré pattern in the morning breeze – like Provençal lavender crops, only not purple.

After a while, and another couple of hundred metres vertical, we reach the ruined low wall of the Park boundary proper, where we make radio contact with the rangers who’ve been tracking the group overnight. The good news: group 13 isn’t far away; The bad news: they’re on a part of the flanks of Mt Sabyinyo that has never been visited before and therefore has no paths. Aha – real explorer stuff – excellent. Or not – the climb doesn’t start too badly, as we fragrantly stomp through a forest of giant mint, goes slightly prickly pear-shaped when we hit the belt of giant thistles (4m+ tall, with spines like machetes) and then goes seriously and metaphorically downhill while going vertically upwards, when we reach the bamboo forest. Insert here any vision you like of haunting melodies and inscrutable Orientals bouncing around lightfoot with swords.

The actual soundtrack de jour was that of a darkly muttering Harris who was both 10cm or so taller than everyone else and broadly encumbered with much camera gear, making the whole bending to fit through macheted gaps something of a problem. And now I know why those same Eastern types hang around in the treetops – the ground below is a complete bastard to navigate – tripping over all those ground creepers at every step would screw the martial arts image in seconds.

By the time we get to 2700m, we can hear a distant laboured grunting. And it’s not (just) me. I duck under a cluster of bamboo stalks, straighten up, half-turn and there he is: a massive, solid, shaggy and completely unconcerned Silverback Mountain Gorilla. He’s about 5m away and bothered not one whit by the strangely coloured and bedecked humans who’ve just materialised on his territory. I swear he raises one eyebrow at me, before casually reaching up – a long way up – to tear a branch off a tree and start stripping the leaves from it. I’m so completely enrapt in what I’m seeing that it’s a good thirty seconds before I remember to lift a camera.

The next hour becomes a series of careful movements through the undergrowth, following the Silverback as he shepherds the females and young up the mountainside. At one point he does get a little pointed with us and mock-charges our group, veering off when he’s about a metre-and-a-half away. I feel very small indeed at this point.

This shepherding of the group is rather unusual behaviour, indicating that he is a new Silverback and unsure about whether the females will follow him – the usual pattern, apparently, is to stomp off ahead of everyone, with blithe confidence that the girls will dutifully follow. Now look, this is behavioural evolution in another species, right? Mere observation and description neither condones nor admires, OK?

We then spend a good half-hour with one of the females and her very young offspring, during which I mostly switch my cameras off and just watch them watch me. I wasn’t bored, they probably were. Eventually and reluctantly, we back off, to allow them to wander off and out of the presence of the strange bipeds who’ve been lurking around them and making random clicking and bleeping noises.

After that, it’s another sweaty, cursing stagger, plummet and crash down the mountain, sustained by the thought of a large cold beer in the new Gorilla’s Nest guest house in Kinigi. Thereafter, it’s back to the Muhabura, a looong bath and a couple of hours flat out to recover.

And the leopard? – that’s another story for another time. This one belongs to the Gorillas.

And there’s a bit of a London Bus scenario here: nothing for ages, then three postings come along at once – I’d had absolutely no Net access in Congo due to the local phone exchange having, ah, melted.