Dark and Continent: Fit the Fifth: Heart of Darkness 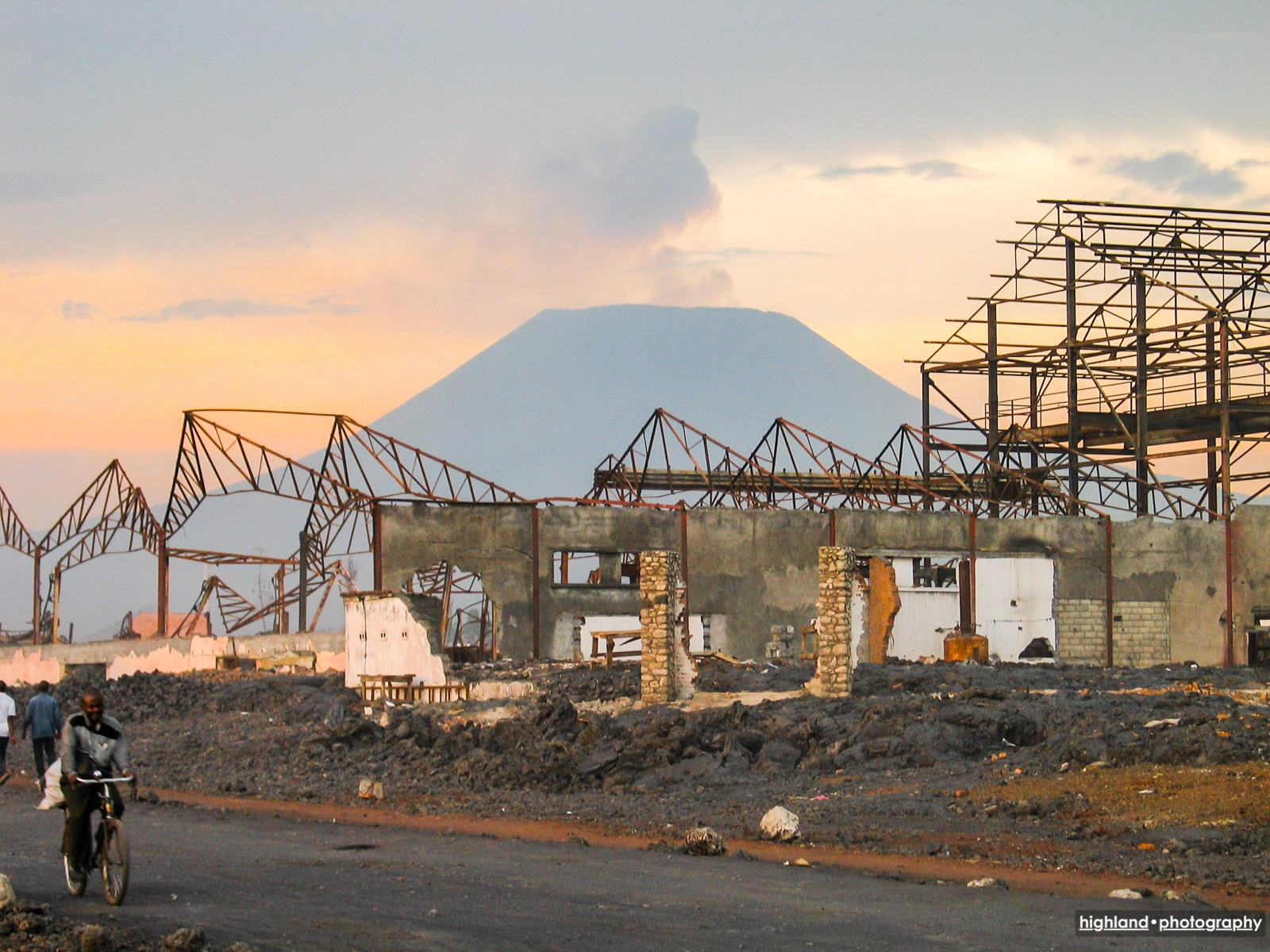 I have really, really been looking forward to using this title, but it had to wait until I got to Congo, although I suspect that Kurtz’ despairing final cry of “The horror, the horror” would nowadays be something like, “les croissants, les croissants!”. That, at least, is what I thought before I got here. My flippancy has done Conrad a great disservice (and if anyone points out that he was writing about what is now Congo Brazzaville, rather than Congo Zaire, I’ll get very upset – so please don’t bugger up a half-decent narrative hook) – this is very much Frontiersville, Afrique: Goma is a town on the edge of everything, not least oblivion: much of it still under a cooling lava flow from last year’s eruption of Nyiragongo; there’s a cannibal rebel army advancing 400km to the North (and there I really wish I were joking) and the town is on a stage 2 volcano alert. After ‘safe’ – always a relative term hereabouts – the stages are, in loose translation:

The air is noticeably sulphurous – eyes stinging and a yellow-orange tint to the sunset. The streams of vapour that were wafting from the main crater of Nyiragongo as we drove down this afternoon have given way to billowing clouds of salmon-pink and green-tinged grey, lending a surreal and darkling overcast to the whole sky. As part of the reason I’m here is to help set up the new DFGF research centre, to replace the one that’s now under 10m or so of lava, I can see that there could be some regular work here. I’ve had less interesting consultancy gigs. I’ve also had far worse times in my life – I think that, like a good contrarian, I’ve done the heart of darkness bit on another continent, and there’s space here to rediscover a little perspective and priority, where Conrad found only spiritual decay and spiraling madness. This, in case you hadn’t gathered, is a tough place to live: practically every possible human and natural disaster has been or is being visited on this place, and yet there’s life above simple grinding existence, there’s real humour and there’s a getting on with whatever it takes to rebuild life and home, under any circumstance.

In some strange parallel world, I’m sitting on my private balcony in the spanking new Ihusi hotel on the edge of Lake Kivu, surely one of the world’s most beautiful shorelines, sipping (quaffing comes later) a large bottle of Mutzig Hein-a-like, while CNN chunters away in the background, so not all is lost (other than having to listen to CNN). That surreality is however never far away here – here’s an interesting exercise in tipping etiquette: how much to tip the guy who’s standing outside my room with the Kalashnikov?

And do I tip him less than his mate from earlier in the day, who was set up with a full machine gun? Leaving gun-totin’ militia aside, the Nile Perch in two-mushroom sauce is truly excellent – especially when eaten to the strains of Chuck Berry’s seminal rendition of Johnny B Good. This experience is now heading rapidly beyond the merely surreal and straight into Apocalypse Now territory.

If the road from Kigali to Ruhengeri was one to have me thinking of the best racing lines to take, that from Ruhengeri to Goma via Gisenyi was one to excite a serious interest and joy in the mere continuance of life – the road has only a passing acquaintance with tarmac, and a much closer one to precipices, landslides, lava flows and mudholes. Much of the downhill traffic encountered belonged to the local kamikaze squad – bicycle mounted loons, descending a rutted alpine track at velocities limited only by gravity or impact, while carrying massive sacks of maize, bunches of bananas and/or twenty or so 10 litre water containers. On such vehicles, a wide-eyed faith in God’s grace is only marginally less effective as a survival ploy than a rapidly melting flip-flop planted on the ground. Local bicycles, like local motorcycles, do not appear to do brakes.

And I got myself arrested. But not very. At the border crossing in Gisenyi, while Vince was sorting out the car’s carnet for Congo, I’d wandered along the lakeshore to take a few pics – pointedly away from the Douane and the actual crossing barrier. This did not stop a local uniformed jobsworth telling me that I’d broken at least a dozen laws and that I’d have to hand over my film. Interesting concept with a digital camera. He was of course after a little ‘doucement’ – a couple of bucks from the gullible mzungo. Yeah, right – I told him I was a Scotsman, and therefore culturally bound not to spend money, but he wasn’t having any. By the time Vince emerged with the carnet though, there was nothing to see – I’d managed to sidestep M le sponger, duck into the Douane commandant’s office and ask, in semi-fluent French (amazing what stress can do), if it was OK to take photos du lac, and would he like to see that I hadn’t taken anything else? Pas de problem…

And something catches my eye to the right – hell, there’s lightning flickering over the volcano. Could be an amusing week. I wonder if the restaurant does hot rocks?

A day or two later, nature has chilled out a little – there’s sun in the sky – still on a stage 2 alert, but the eruption has gone the other way from the crater – down into the park on the far side of the range. Doesn’t help much long-term though – Nyiragongo normally fills up with magma on a roughly twenty-year cycle; after last year’s eruption, it took no more than six months to half-fill the magma chamber. There’s a bunch of Japanese vulcanologists on permanent watch though – even a couple of hours warning will make all the difference. Gives a certain frisson to daily life here. And a postscript to the whole Net access business here – have now found friendly UN bunch with satcoms (remember my sarcastic comments about over-equipped posey landcruisers? I take it all back…) and also an enterprising local Internet Café using another satellite link.

So I’m now sitting in the lakeside garden, having a beer and watching the hotel’s colony of Crowned Cranes strut around the lawns. I did however miss the sight of the hotel’s young cat stalking the things in a fit of suicidal optimism – these things are about 1.5m tall, with a kick that’s just like that of a tall thing with very long legs. Tiredness is a feature of the day, which isn’t overly surprising after being taken clubbing last night – for a town on the edge of obliteration (or possibly because of being so), there’s a very lively nightlife – dinner was giant Tilapia at VIP (that’s the name) restaurant (pygmy not on the menu – sorry, with the events to the North, there’s a whole array of incredibly bad taste jokes going around), followed by a visit to Coco Jambo, Goma’s #2 night spot.

That proved a little dead, so we moved on to the #1, Bobongo (just park on a handy lava flow) – although, as a party of eight blokes, we weren’t exactly in social balance with ourselves, let alone anyone else. Good music though – Zouk – a sort of double beat combo of Congolese trad with drum’n’bass, with a little jazz-funk-fusion-latino thrown in.  Excellent stuff. Spent most of the evening people-watching and having small bets with Vince over his (to my mind) overly cynical interpretation of people’s motives , specifically the interactions between the array of stunningly gorgeous women propped up at the bar and the lesser number of pasty male euro-ex-pats present. Judged on the basis of observation rather than participation (honest), I lost, every time. Clearly an innocent abroad. I was even boggled by the motto on the Primus beermats – “Suka ya sekela”. See what I mean?

As we turned into the hotel this evening, one of the minibus taxis turned out. Like many such, it had an aspirational name plastered across its front in florid hand-painted lettering. I’m used to seeing “Cadillac”, “Mercedes” or even “God and Jesus” on the front of some battered Toyota Hi-Ace, but this one clearly belonged to a local inverted snob: it proudly displayed “Lada Samara”, lovingly rendered across it’s dented snout. Honesty in advertising continues – a kiosk in the local market is advertising itself as “Best Pirated Music”. And now, out of respect to the brave Japanese on volcano watch, Sayonara…